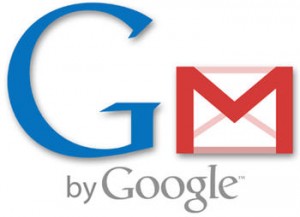 Google is all set to make Gmail more informative and productive. It has recently introduced the people widget, a new Gmail feature that adds contextual information about those with whom you exchange email. During the next two weeks, Google will roll out the new feature. It will appear on the right hand side of the messages.

The people widget surfaces content from friends, family and colleagues that is already available but may be hard to find and then makes it easier to connect with them. From the screenshots provided by Google, it looks like the widget includes each person’s job title, recent email exchanges you’ve had with them, photo, calendar availability, and shared Google Docs. It also includes Buzz updates.

If you’re engaged in a group email conversation or a Google chat, all those participating will be listed along the right side, and above them will be icons leading you to a variety of ways to communicate with them, including chat, email, calendar events and phone calls.

Google isn’t the first company to offer contextually relevant information ( but it's within Gmail). Prior to Google, Rapportive and Xobni have created browser widgets that offer similar functionality. Rapportive includes information from more sources, including LinkedIn, Skype. Rapportive only looks at the contacts you’re interacting with (and not your message content). But the People Widget has got some advantages, as it is not a browser plugin or widget but an in-built feature. Also it is not a third-party support, it is trustworthy, so it looks for the content of the mails and other information which is not an issue. 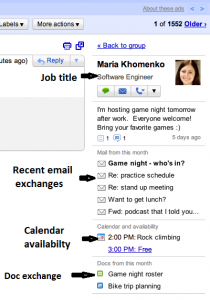