It is no secret that Google has been planning on bringing games to Google+ eventually – after all logo and references to Google+ games had been found in the Google+ source codes. Today, Vic Gundotra, Senior Vice President, Engineering at Google, has officially announced the Google+ Games.

Today we’re adding games to Google+. With the Google+ project, we want to bring the nuance and richness of real-life sharing to the web. But sharing is about more than just conversations. The experiences we have together are just as important to our relationships. We want to make playing games online just as fun, and just as meaningful, as playing in real life.

Google+ Games is nothing different from the Facebook games that we are used to. They are the Flash and HTML5 games that you see on Facebook. Like in Facebook, users can share their high scores, invite their friends etc. in Google+ Games as well. 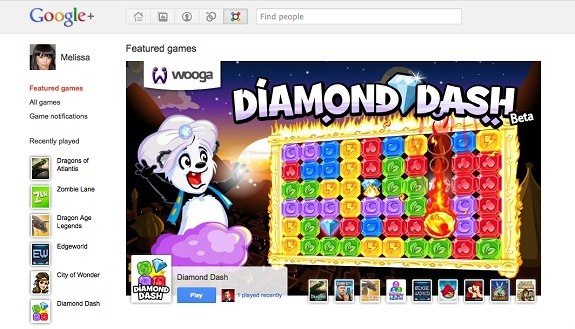 However, a major difference is that in Google+, the updates from the games will not show up in the main stream. Google seem to have learnt from Facebook. In Facebook, games update from friends shows up in the News Feed. This can be very irritating sometime. In Google+, the games updates – high scores, invites etc. - will be available only under the Games tab.

Google is in the process of rolling out the Google+ Games. They already have quite a few games – including Angry Birds, Zynga Poker, Bejeweled Blitz etc. There is no Farmville or Cityville through.

Google Unveils Games For Google+ was originally published on Digitizor.com on August 12, 2011 - 4:44 am (Indian Standard Time)