LBE Privacy Guard Is An Absolute Must Have Android App

Android is a fairly secure operating system. Before an app can use resources such as location data, network access etc., it needs to get the approval of the user first. However, the app permission system in Android is an all-or-nothing model. For example, if an app requires both your location and internet access, you can either approve both the permissions or reject both the permissions. In the later case, the app will not get installed at all. There is no way for users to install the app with some permissions granted and some rejected.

LBE Privacy Guard is just the perfect app for that. The app gives users the ability to manually configure each and every permissions of the different apps installed. Users can outright deny a particular permission, approve it or decide whenever the permission is required. This is a very important app because with this you can block apps from accessing data which you do not want them to access. LBE Privacy Guard also keeps a log of all the instances when the apps tries to access these data - both for when they are approved and not. 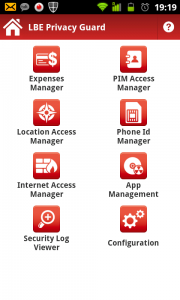 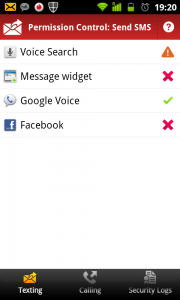 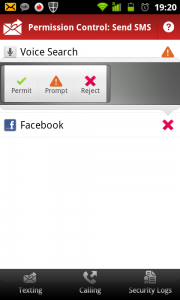 The screenshot on the left is that of the main screen of the LBE Privacy Guard app. From here, you can access the different features of the app. LBE Privacy Guard does not put all the permissions in one place. They are conveniently arranged as Expenses Manager, PIM Access Manager, Location Access Manager etc. You can also access the App Management (we will talk about this later), the log viewer and configurations from this screen.

The screenshot at the middle is what you will see when you access any of the Managers from the home screen of the app. For this screenshot, I have accessed the Expenses Manager. This lists those permissions that may cost you money - that is calls and texting. The different permissions that falls under the particular manager are shown at the bottom tab.

As you can see, I have given permission to Google Voice to send SMS and denied the permission to Facebook and Messaging widget. The permission for Voice Search is set to prompt me whenever the app wants to send SMS. To change the particular permission, simply tap on the app name and you can change it. When you go back, LBE Privacy Manager will ask if you want to save the change. 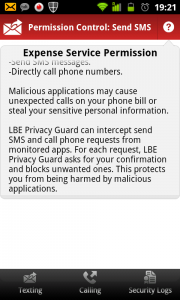 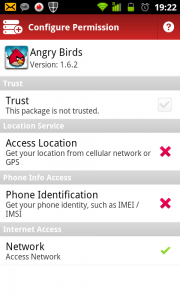 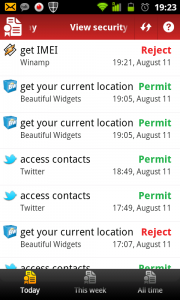 What is shown in the left screenshot is the help. In case you need more detains about a particular permission, simply tap on the question mark at the top right.

The screenshot on the right shows the Security Log. Here you can view all the instances when the apps requests for the permissions and whether it was ranted the permission or rejected. 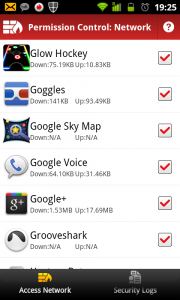 The screenshot on the right is the Internet Access Manager. This is deserves special mention not only because it allows you to see and configure which apps can access the internet, but it also shows the data that the apps have downloaded and uploaded. This will be very useful for those who have a limited data plan as those apps using up all the data can be pinpointed.

Despite all these features, LBE Privacy Guard is a free app and does not have any ads. The link to the app in the Android Market is given below. You can also scan the QR code on the right with your Android device to install it.

Please remember that your Android phone needs to be rooted in order to use this app.

LBE Privacy Guard Is An Absolute Must Have Android App was originally published on Digitizor.com on August 11, 2011 - 8:10 pm (Indian Standard Time)