Google uses a tricycle to get college campus photos for StreetView

Google StreetView is a product which can be used to view street level photographs, take virtual walks; pan, rotate and zoom through cities around the world and find shops, restaurants, parks, hotels etc. Since the photographs of the streets that are taken by Google for this purpose, contain pictures of people due to which Google faces complaints from many individuals and institutions that have been photographed around the world.

During all this time Google Inc. has been using car-mounted cameras to prowl streets in the U.S. and around the world. But now they have come up with an innovative idea of using a strange looking tricycle with a camera mounted atop it with the help of a stand. 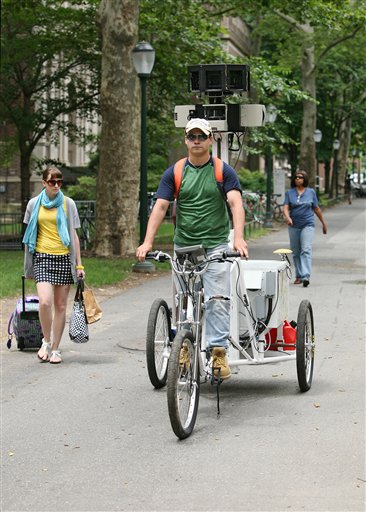 According to a Newsvine article, using a tricycle is a nice way to put up this entire StreetView thing to the entire public. The tricycle is actually a pedicab-like vehicle mounted with an 8-foot-high camera using a stand. Anyone who sees the vehicle for the first time will give a strange look to it, the reason being the build of the vehicle. As of now, this tricycle has been going around UPenn to photograph the campus which will be later integrated into the streetview.

The vehicle weighs 250 pounds and is driven manually by a cyclist. With the camera mounted on a tower in the back, anyone just needs to sit on the jump seat and navigate the vehicle throughout the campus. The rear portion of the vehicle houses a power source (most probably a generator) and other functionality to store the recorded images or videos, with the words "Google" neatly engraved. Image tagging is done on a later stage.you can check out this attached photograph to find out how exactly the thing looks like.

Google uses a tricycle to get college campus photos for StreetView was originally published on Digitizor.com on June 21, 2009 - 6:23 am (Indian Standard Time)